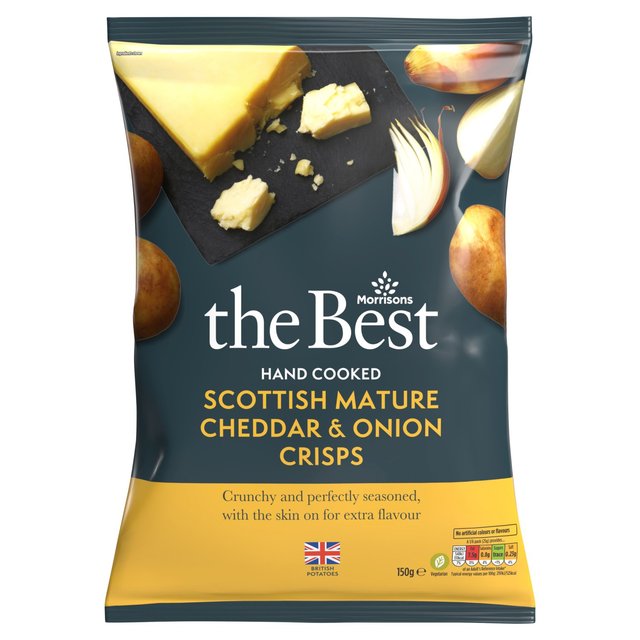 Gepubliceerd januari 31, 2022 Door Bannie Cheff
Welcome back to the reviews, a busy little cripple comedian like myself can be swamped after preparing an Edinburgh Fringe show. However, we are back with a review straight from Portobello, Edinburgh, where we have placed our cane rack during this year’s Fringe.
Just like last year, we have taken it upon ourselves to review multiple different brands of one flavour of crisps. Last year we did salt & vinegar, this time around we will test another British classic: cheese & onion! SPOILER: during the testing of these crisps I realized something important! I do not particularly care for cheese & onion crisps.  However, let us get started!
Mackie’s of Scotland: Cheddar & Onion Thick Cut Crisps
Good old Mackie’s, the crisp of independence, the so-called perfect companion to a scotch ale. These thick cut crisps are only that: thick and bland. It may be that they placed lightly salted crisps in this bag by accident but the cheddar and the onion were nowhere to be found!
Rapid roundup:
Smell: faint
Taste: bland
Texture: thick (I like the thick stuff)

150g for £1,70 that is £0,011 a gram
Morrison’s The Best: Mature Cheddar & Onion Crisps
Our nearest supermarket here next to the rack is a Morrison’s and a big one at that. I personally like those, although they do not have the most varied selection of crisps.
If you weren’t offended yet by this review let me get to that now. Mature cheddar?! What the actual flying bison! Dear Brits, Cheddar is not a cheese, it is an insult to Gouda, Parmesan, Brie and Feta! These crisps taste like old socks, and no onion to be noticed! This is not a good crisp and definitely not ‘The Best’.
Rapid roundup:
Smell: too smelly
Taste: yuck
Texture: a little on the flaky side. 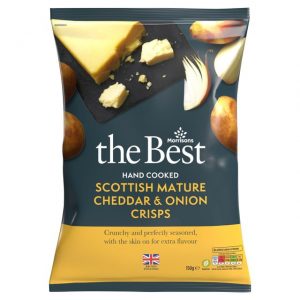 150g for £1 that is £0,006 a gram
Tesco Finest: Mature Cheddar and Onion Crisps
Last year we were positively surprised by Tesco finest Sea Salt & Cider Vinegar. This year not so much. Yes, cheese is salty, we know this! However, a good cheese has some tang, a little sweetness to it. However, this is lacking in this crisp, and a true shame if I might say. We do taste some onion in these but it is too faint to play a major role in the pallet of the crisp.
Rapid roundup:
Smell: oniony
Taste: too salty
Texture: nice and crunchy.

150g for £1 that is £0,006 a gram
Walkers Sensations: Cheddar & Chutney Crisps
Okay, I hear you mumbling to yourself “Chutney?! Chutney is not onion!” And this is correct, however, this is an onion chutney. This is probably the best buy for your buck. They are a tiny bit expensive but the onion and cheddar are working very well together. You taste actual cheese in this and the chutney is a little spicy. It’s a nice way of preparing a classic.
Rapid roundup:
Smell: like a cheese board with some onion next to it
Taste: spicy but with little tangy sweetness to go about it
Texture: not too crunchy, could be better. 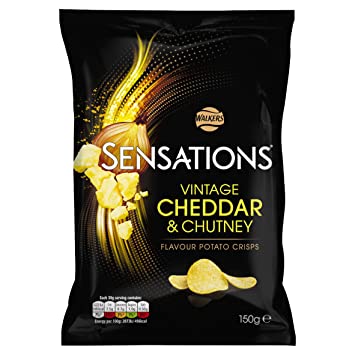 150g for £1,85 that is £0,012 a gram
Kettle: Mature Cheddar and Red Onion Crisps
Kettle is expensive, we know this. Furthermore, they are a little posh, a little bigmouthed. One of the fist things I noticed on this packet was a little line of text in gold letters that says: ”No artificial substances used” My question: who are you kidding? Your crisps are shipped in a bag lined with artificial aluminum foil. But let’s get on with the review. Maybe they should have used some artificial flavors, because these crisps are bland.
Rapid Roundup:
Smell: Sock like
Taste: faint and slightly bitter
Texture: crispy.